Fox Chase Cancer Center held its annual wrap-up event on December 11, 2014.  The event honors teams who participate in the annual Dragon Boat Festival to raise money for cancer research. This year, West’s Exton team were honored as the top fundraiser. In addition, two West team members were recognized as top individual fundraisers, including Jo-Ann Adamson, who was recognized as the top individual fundraiser for the 2014 Philadelphia Dragon Boat event.
Team members worked hard this year to raise more than $171,000 for Fox Chase. Over the past decade, West has raised more than $1 million to support cancer research.

During the wrap-up event, Fox Chase presented a video that highlighted the year’s fundraising activities, which included a nice mention of West. Team members on the Dragonphyre and Dragonphlame boats were honored with beautiful blankets to commemorate the event and their work to raise funds.

The Dragon Boat Festival has become a family event. If you are interested in joining the fun, watch for more information in 2015. 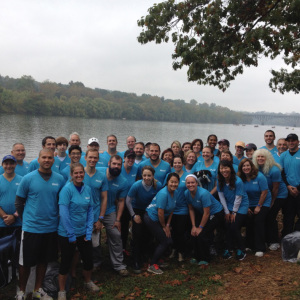