While medications can provide life-saving solutions to patients, they can also result in harm to medical personnel who might suffer unintended exposure to potent drugs. The seemingly simple act of placing a syringe needle into a septum-sealed vial can result in inadvertent needle-sticks, with potential drug exposure. Additionally, the transfer of potent chemotherapeutic drugs can result in fugitive droplets or volatilization of the drugs and therefore personnel exposure. 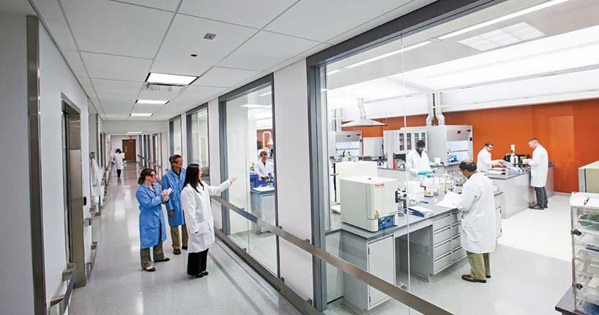 USP <800> HAZARDOUS DRUGS—HANDLING IN HEALTHCARE SETTINGS provides specific requirements to ensure that hazardous drug (HD) exposure is minimized for medical staff. One means of applying supplemental engineering controls for the protection of workers is the use of closed-system drug-transfer devices (CSTDs) for the compounding and administration of HDs. USP <800> defines this as, “…[a] drug-transfer device that mechanically prohibits the transfer of environmental contaminants into the system and the escape of HD or vapor concentrations outside the system.”

CSTDs are used as a safe way to connect an infusion bottle or drug vial to a syringe and then to safely transport the filled syringe and connect it to an IV or an infusion bag. CSTDs that connect to an infusion bottle or a vial typically have a spike, either made of plastic or a needle, which punctures the septum on the drug container, and typically also have clips, which lock the device onto the neck of the container. Once the CSTD is attached to the drug container, the distal end of the device has a port that can interface with a matching syringe attachment, allowing for connection of a syringe to the drug container with minimal potential for worker exposure. Vial adaptors, meanwhile, are similar devices used to circumvent using syringe needles but are not necessarily designed to minimize other routes of personnel exposure to hazardous drugs. The new USP <382> ELASTOMERIC COMPONENT FUNCTIONAL SUITABILITY IN PARENTERAL PRODUCT PACKAGING/DELIVERY SYSTEMS , to be official in December 2025, specifically places the onus on drug manufacturers to establish compatibility of closures with needles and spikes.

The act of filling a lyophilized drug vial with diluent from a syringe would create pressure inside the vial, which could result in spraying of pressurized drug at the health worker involved in reconstituting the drug. CSTDs have a built-in pressure equalizing mechanism to facilitate safe infusion and aspiration of drug container contents. Some devices are equipped with an outlet to the atmosphere through a sterilizing membrane and charcoal filter, which allows for sterilized air to pass in and out of the vial while hazardous drug vapor is retained on the charcoal filter. Other devices have a built in ballast that expands and contracts to accommodate infusion and aspiration of diluent into and from the drug container.

CSTDs can vary greatly in their design and, therefore, in how they interact with the drug container. The piercing of the drug container closure is unique to each device and it is important for the drug manufacturer to demonstrate the compatibility of their drug and container-closure with each CSTD variant that could be used to transfer the drug out of the container, per USP <382>, whether it is in how the closure is punctured or in how the drug interacts with the CSTD’s materials of construction.

The act of attaching a CSTD to a drug container is regulated by a standard published by the International Organization for Standardization (ISO) to demonstrate mechanical compatibility. ISO 8536-2 covers spikes and closures for infusion bottles. This standard addresses the act of piercing the septum of the drug container closure with the spike incorporated in the CSTD. The test parameters to consider include septum fragmentation, spike penetration force and spike retention and/or sealability, as described by West’s Mary Tan.

Septum fragmentation (coring) is further discussed by West’s Candice Sun, Bjӧrn Henze and Fran DeGrazio. Fragmentation is evaluated by collecting, measuring and counting particles formed by the penetration of the closure with a spike.

Penetration forces are measured with a force tester, such as described by West’s Daniel Bantz. These measurements indicate the force required to pass the spike through the closure and affix the device to the drug container.

Spike retention and/or sealability measures the ability of the closure to hold the spike without leakage. Testing is performed by having water filled infusion bottles’ closures punctured with the spike, inverted and a test weight attached to the spike. The closures should retain the spike without visible leakage of the water.

There are, however, some gaps in the standards, as they pertain to CSTDs and vial adaptors, and some of these limitations are described by West’s Cathy Zhao and Allison Radwick. The formation of particles and silicone globules could impact the stability of biologics and the material of construction of the CSTD could affect the composition, potency and stability of the drug formulation such that it is up to the drug manufacturer to ensure that these devices are compatible with their drug. The position of the spike orifice, when installed into a drug container, relative to the closure could affect the ability to withdraw a complete dose of the drug from the container since closures may differ in design and thickness. Finally, the intrusion of the closure into the drug container, particularly for a large diameter stopper, could result in significant leakage and defeat the intent of the CSTD to protect medical workers from hazardous drugs. The latter is discussed by West’s Matthew Gehrmann.

The use of CSTDs is an important topic in parenteral drug delivery and widely discussed at Parental Packaging conferences, as described by West’s Bettine Boltres.

West Analytical Services is both experienced and equipped to perform testing of CSTD compatibility with drug container systems, as discussed by West Pharmaceutical Services’ Aaron Chapman. As a supplier of container-closures for vials and infusion bottles, West has extensive experience in studying the interaction of spikes and needles with closures, how they penetrate the septa, how they form seals with the closure to prevent leakage of hazardous drugs during transfers and how they affect dose delivery. Contact us to learn more about how West Analytical Services can help you meet USP <382> requirements by establishing compatibility of your drug packaging with different CSTDs. For more information on West’s studies regarding CSTD compatibility with West stoppers, such as An Evaluation of Elastomeric Stopper Compatibility with Closed System Transfer Devices by Aaron Chapman, Haley Shappell, Christian Eichhorn and Stacey Vaughan, along with other technical information, please visit the West Knowledge Center.