West Contract ManufacturingWest in the Community

West's contract manufacturing team has once again reached a record level of support for Temple Street Children’s Hospital and recently presented a check for €18,000 that was raised by employees in 2015.

As part of the annual West without Borders campaign, funds were raised in many ways, including a flagship annual cycling event at the local shopping mall, cake sales, a raffle, a soccer tournament and Ladies Mini Marathon sponsorship. 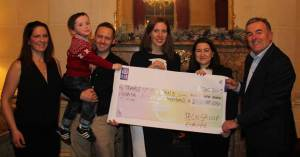 “I’m proud to say I work for West. They have provided fantastic support to my family over the past four years,” said Terry. “My son Tadhg was born with chronic renal failure and recently received a kidney transplant donated by my amazing wife Clidhna. I’m thrilled to say Tadhg has thrived since being transplanted. The level of care that Temple Street can deliver is only possible through the generous support of people like my friends and colleagues at West.”

Temple Street, founded in 1872, is an acute pediatric hospital serving some of Ireland’s sickest children and providing a referral and care service on both a regional and national basis.  Seven major specialities at Temple Street today include neonatal and paediatric surgery, neurology, neurosurgery, nephrology, orthopaedics, ENT and plastic surgery. Temple Street cares for 145,000 children per year.

“We are very grateful for the ongoing generosity that the West contract manufacturing team gives our special hospital,” said Helena Bibby, Corporate Development Manager, Temple Street Foundation. “Gifts such as these allow the renal department at Temple Street Children’s Hospital in Dublin to perform such miracles both pre- and post-transplant.”