More than 700 elementary, middle and high school girls in grades 5 through 10 attended the event, which features successful women in science, technology, engineering and math (STEM). Attendees learn the facts about how STEM careers can be fulfilling, fun and rewarding personally, professionally and financially.

West was a gateway sponsor of the event and thanks to the joint cooperation of the H.O. West Foundation, West without Borders® committee and the WIN (Women Investing and Networking) Group, several West women were able to attend the event, including Sr. Vice President and Chief Commercial Officer, Karen Flynn, who assisted presenters from Philadelphia-based start-up company Integral Molecular as they taught students about the importance of iron in the body and sources of iron in food. 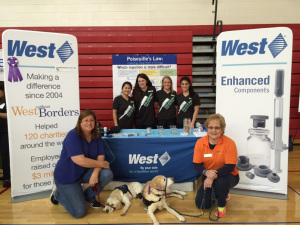 “The girls did a hands-on exercise in which they crushed up cereal fortified with iron and then used magnets to actually ‘pull’ the iron from the cereal so that you could visually see it,” said Karen.

At the booth, West’s Monica Habash, Packaging Engineer; Than Quynh Le, Project Specialist, Technical Customer Support; and Jessica Bohn and Jenna Lockyer of the West Sales team taught the students Poiseuille’s Law, which focuses on how a liquid’s viscosity and the diameter of a syringe can affect the pressure needed to push a plunger rod down on a syringe. The experiment, which was designed in collaboration with West Analytical Labs, used corn syrup and water to highlight the different pressure needed to administer the liquid.

“The girls were very engaged in the experiment. It gave them a chance to feel the difference in viscosity and how it applied to Poiseuille’s Law in real life. They could easily see how much thought, science and engineering went into the design of West’s delivery systems,” said Jenna.

A second experiment demonstrated the difficulty some people may have – including those with dexterity issues such as Rheumatoid Arthritis – in completing a self-injection. The students were asked to put on a thick leather glove and then pick up a syringe. The West WIN volunteers then demonstrated products including the SmartDose®and SelfDose® injectors that are designed to fit the needs of customers and patients.

“The event is a great place for students to get a better understanding of the different types of STEM careers available to them, including designing syringes and delivery systems for patients,” said Jessica. “We use STEM every day, even in sales roles. Just because you enjoy science doesn’t mean your career will take place in a lab.”

“Even though we are busy to manufacturing high quality products for our customers, West always makes time to give back to the community,” said Laura. “For example, we support Canine Partners for Life, which raises and trains service dogs to assist individuals who have a wide range of physical and cognitive disabilities.”

The WIN volunteers are already excited to attend the event next year.

“We’ll definitely be back,” said Jenna. “We’re already starting to talk about how to engage the girls and show them how to get the most out of a career in STEM.”

SmartDose®, SelfDose® and West Without Borders® are registered trademarks of West Pharmaceutical Services, Inc., in the United States and other jurisdictions.